It’s mid-August, and that means that we’re hitting the peak of corn season in this part of North America. 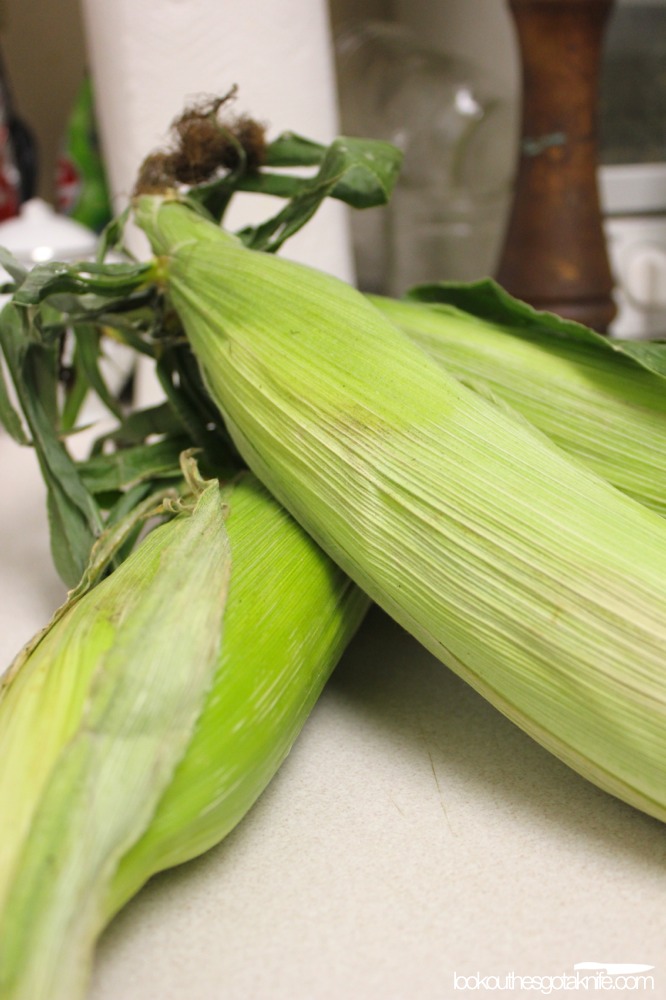 But why would I want to talk about corn? Corn’s bad. Well, at least it’s been portrayed that way in the last decade or so. And there’s good reason for thinking unkindly of this absurdly mutated grain. There’s corn’s over use as cheap filler, high fructose corn syrup, etc. Most of corn’s problems can be attributed to the massive subsidy given to corn farmers in North America. If corn weren’t subsidized, it wouldn’t be cheap (the full cost of growing it would be reflected in the price), and thus there’d be less incentive to try and turn it into anything and everything. Sadly, when a food is cheap, this is a pretty common occurrence in the food industry.1

Despite corn’s abuses in fakery, we can’t forget that it started out as a pretty humble food. Like rice was to Asian cultures, and bread was to Europeans, corn was an important staple for American indigenous cultures. It was so important that when the Spanish showed up, they left the Americas with holds full of corn. The unfortunate part is they forgot to take the process of nixtamalization with them, and killed themselves with pellagra.

Silly conquistadores, nixtamalization is for Aztecs!

Worry not, today’s sweet corn varieties don’t need to be specially treated before eating; though cooking is highly recommended as it can be rather bulky in the digestive system. Cooking will break down some of the starches and make it a little easier to digest. ‘Cause we all know that, uh, forensically speaking, it’s already pretty easy to tell that outer bran doesn’t get digested all that well in the gastrointestinal pathway.

Don’t give it more reasons by eating it raw.

Corn doesn’t have to be relegated to canned side dishes, tex-mex and something you serve on the cob at barbecues. The fact that it works well equally in sweet or savoury dishes means it can be quite a versatile ingredient that can be used in a wide range of applications. Even as the main star.

I love corn chowder, and I’m of the belief that this dish started out because someone misheard the word “clam” for “corn”. They’re pretty much the same dish. Bacon? Check. Cream or milk? Check. Potatoes? Check. Onion? Check. Clams/Corn/Clorn? Check.

Despite being so associated with New England, chowder is undeniably French in origin, ingredients and flavour. The soup itself has existed in Europe for a long time, and the word is generally thought to come from “chaudière”, which is the French word for a large cooking pot. The first time the word was used for a soup is apparently by Breton fishermen in Newfoundland.

Sorry. Canadians aren’t allowed to be patriotic. I’ll go hide in the corner for the remainder of this recipe.

1. Preheat an oven to 400°F. Put the parsley stems, bay leaf and peppercorns into the center of square of cheese cloth. Bring up the corners and tie with a piece of the string to make a sachet. Set aside.

2. Shuck the corn and cut the stem ends flat. On a large cutting board, stand the cobs up on end and slice off the kernels. Set them aside for now and keep the cobs.

3. Place the now kernel-less cobs on the pan and roast them in the oven until they’re turning nicely brown (about 20mins or so, but keep an eye on them them as the high sugar content means they can burn quickly).

4. When the cobs are nicely roasted, combine them with the stock and sachet in a sauce pot and place over medium-high heat. If the cobs are too big to fit, cut them in half. Put a lid on the sauce pot; we don’t want to lose any of that liquid or flavour. If it boils, turn it down to a simmer. Doing this to the cobs will help give the soup a subtle toasted corn flavour.

5. In a dutch oven over medium-low heat, render the pancetta until it’s dark mahogany and crispy. Pull the pan from heat, drain but reserve 5mL (1 tsp) of the rendered fat. Set the pancetta aside. DO NOT clean the pan of any of the lovely darkness left on the bottom of the pan. Unless of course it’s burnt to a black colour. Only then should you clean your pan.

6. Add the onions to pan with reserved fat and return them to the burner. Set the heat on medium low and sweat the onions down until they’re soft.

7. Stuff the corn into the stock pot and cook for about 5 minutes stirring occasionally. Add the garlic and stir constantly for about 1 minute, then sprinkle in the flour and continue stirring for about another minute.

8. Remove the cobs and sachet from stock, and pour it into the dutch oven along with the potatoes. Check the salt level and season accordingly. Bring it up to a simmer, stirring occasionally. After about 10-15 minutes, add the cream and let it continue to simmer.

9. Take the dutch oven from the heat when the potatoes have softened and have reached a stage of being edible. Add the fresh parsley leaves. Check the seasoning and re-season if necessary. 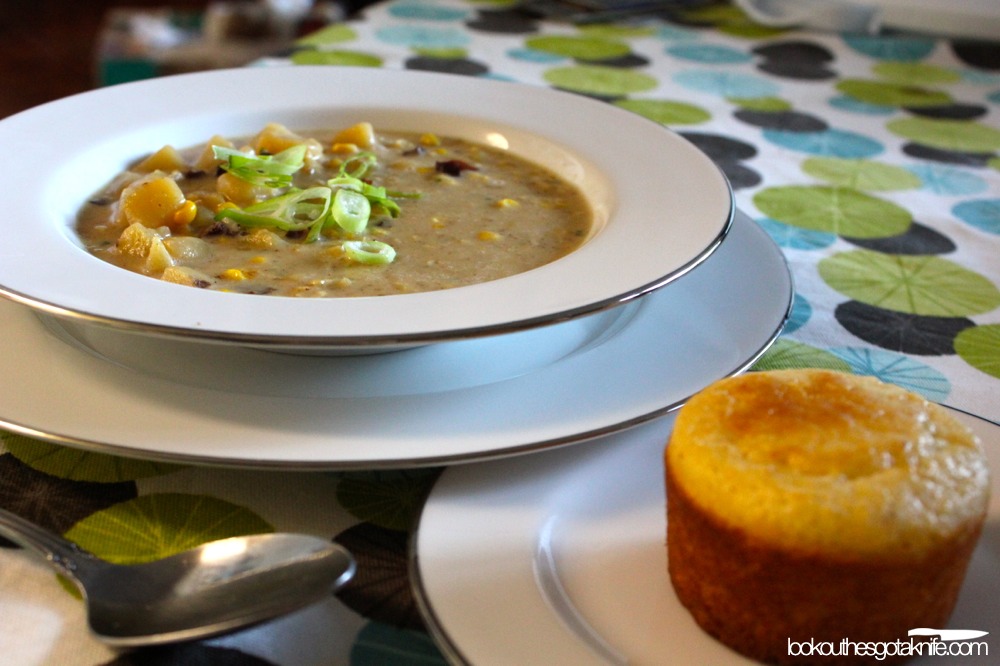 Serve hot, garnished with green onion. With bread on the side. Corn bread is nice.