Four random things you should know

1. A lot of food is poisonous.
If you’ve always wanted a *real* excuse to avoid eating fruit and vegetables, here it is. You know Oxalic acid, that compound that makes rhubarb leaves poisonous? In high concentrations, it can create painful kidney stones and leach calcium from your body. In rare occurrences, it can be fatal. Well, it turns out it appears in quite a foods.

We aren’t all dead yet, so what’s up?

Heat. Most of the foods high in oxalic acid are generally cooked before we eat them. It turns out that the sheer act of heating oxalic acid-rich foods is enough to neutralize most of the acid itself.

Other nutrients in foods can also neutralize or block absorption of oxalic acid. As acids want to bond with minerals to form salts, foods higher in less toxic acids (like citric, malic or tartaric acids), end up competing for minerals and lessening their availability to oxalic acid.

The nutritional value more than outweighs the potential risk from OA, but that said, too much raw food high in oxalic acid (like, most of a crudite platter) can cause gastrointestinal upset. Over the long term, it has the potential to do worse.

2. Wine should never be stored flat.
Wait a minute! Haven’t we always been told to store wine on its side?

Oxygen is wine’s worst nightmare. It can make a good glass of wine taste flat and metallic in mere hours. Which is why unopened bottles thankfully have little oxygen in them. And what is there is controlled and just enough to add certain flavour characteristics over longer periods of time with proper storage. But that little amount of oxygen can have different effects based on how a full bottle of wine is stored. To give you an example, I’ve created a little graphic.

With blue representing surface area exposed to oxygen you can see that a full bottle (fig.1) has very little of the wine’s surface area exposed to air. This is the optimal position for any wine with a screw-top. A full bottle laying flat (fig.2) has the same amount of oxygen in it, but that oxygen has been flattened out and now in contact with a greater surface area of the wine. While fig.2 has a cork exposed to moisture, keeping more oxygen from entering into the bottle by keeping the cork swollen within the neck, it’s allowing a far greater amount of the current oxygen in the bottle in contact with wine. This could lead to premature aging and a less than optimal product, especially if you’re hoping to age a decent Bordeaux for a decade or so.

A full bottle with a tilt of around 30° (fig.3) has again the same amount of air and is keeping the cork moist, but because of the tilt, a far smaller amount of oxygen is touching wine. This is the optimal position for a cork-sealed wine, and easily achievable at home through placement of a rolled up kitchen towel under the bottom end. The closer you are to a 45° angle, the less oxygen will touch your wine.

So, your best bet for storing opened wines? Don’t. Finish that bottle off. If you can’t do that, store it upright (fig. 4) or decant the wine into a smaller, screw-top bottle. Keeping a few spare demi-bottles around is good for those times. Just as long as the container is glass and it can be filled nearly to the lip, you’ll get more life out of that wine.

3. Keep your oils in the fridge.
Or better yet, a wine fridge.

That expensive extra virgin olive oil you bought last week will lose its pepperiness and green flavour the more its exposed to heat and light. Not only that, but oils high in polyunsaturated fats can go rancid at even the cooler side of room temperature. This lists includes olive oil, soybean, canola, peanut, nut oils and basically just about every liquid cooking oil commonly used.

Aside from flavour and texture, we cook with oils because they are an incredibly good medium for heat transfer; that is they allow heat to move through them really well. This allows them to heat up remarkably fast when put in a hot pan, and foods coated with oil will cook faster and more evenly. But that also means that any heat in the surrounding atmosphere will transfer to the oil within a container just as easily.

Olive oil can thicken and go cloudy when cold. This is a natural effect of its monounsaturated fats solidifying below about 10°C (50°F). It does not however, harm the oil’s texture or flavour. Simply removing the oil from the fridge for a few minutes before use will return it to its more recognizable state.

A wine fridge is a perfect environment for cooking oils. It’s cold, but not as cold as a regular refrigerator. If you store oils at the same 12-15°C (54-59°F) temperature used for red wines, your oil will be better preserved and relatively protected from light, but won’t be cold enough to turn monounsaturated fats solid. In lieu of a wine fridge, store oils on the top shelf of your fridge door.

But you want it to be handy, right? Buy some opaque squeeze bottles with caps/close tops (like these kitschy condiment bottles), fill them 3/4 of the oils you use the most and keep them in a cool place in your pantry.

4. Store bought bread crumbs suck.
These breadcrumbs are the bakery equivalent of sawdust. When wood is being sawn and milled, a vast amount of sawdust is created in the process. Similar things happen in a bakery; bread just loves to drop crumbs, whenever possible. Those crumbs get collected and packaged for resale. Might as well make a buck on something that would’ve just been thrown away, right?

Most of the time, it can contain a mixture of different types of bread, including a proportion of brown and high-fat breads. They end up having a muddled flavour and are so small they act more like sand than anything else. Natural and added fats in some types of bread can lead to a softer texture and inability to become crunchy. That they’re made of pre-browned bread is also a disappointment, as most of the naturally wonderful aromas of maillard and browning reactions are lost on the factory floor.

“Mie de pain” (middle of the bread), as the french call it. Essentially, it’s white or “fresh” bread crumbs. Crusts are taken off slices of bread, and the resulting white is chopped fine or rough chopped and then processed in a food processor until rough crumbs. 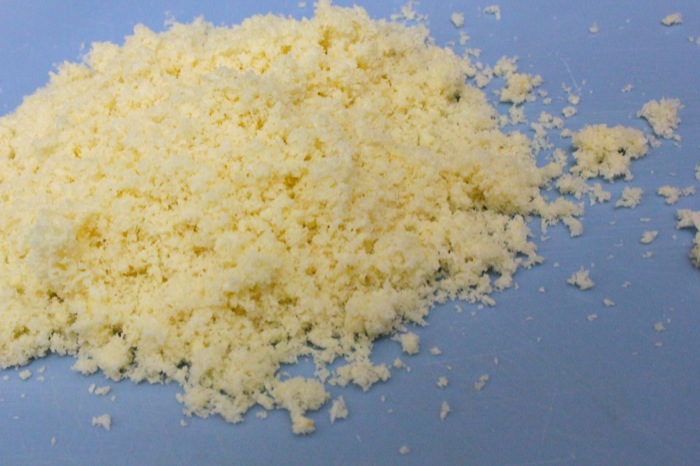 The results are dramatic. Mie de Pain ends up being quite similar to Panko, very crunchy with a more bread-like flavour. The relatively low fat content means also they dry out more crisp and crunchy. You’ll also get those wonderful aromas of baking bread, adding another component to any baked or fried items.

A loaf of plain white bread costs about the same as a container of breadcrumbs, but you will get a higher yield and better product from mie de pain. They can be put in a low oven and dried out for pantry storage, but best results come from simply freezing them in an airtight container in a non-evil freezer. 1