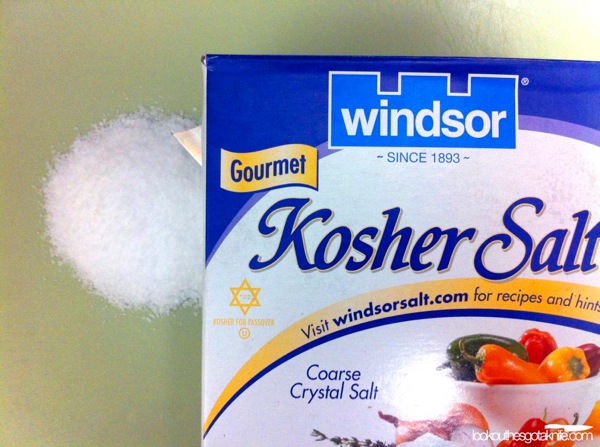 I’m going to say something that many an inexperienced home cook will dread:

Salt measurements in savoury recipes should be largely ignored. Or at the very least, taken with some deep skepticism.

You think I’m kidding, right? Lemme lay down some info smackdown on you.

Almost all raw food ingredients contain salt (well, sodiums), even in minute amounts. That salt varies dramatically based on the location the food was grown, what the conditions are like, the species and what time of year it is. A plant grown near a body of salt water like an ocean or sea will contain naturally higher amounts of salt, even without direct contact with seawater. Likewise, a pig raised during a hot summer is likely to be lower in salt than a temperate one, due to added sweating. For possibly genetic reasons, milk from Jersey cows naturally contains lower concentrations of sodium and chloride than other breeds like Holstein.

Humans also vary in salt tolerance. As we age, our ability to taste declines, and thus we rely more on salt to focus the flavours we taste. Something salty to a teen might be pleasurable to someone in their eighties. And to add more to the salt-inconsistency, some people just have saltier palates than others, some are super tasters (having significantly more tastebuds), and some just like salt more.

Qualities in ingredients like acidity, sweetness, fattiness, bitterness and others can also affect how we taste salt. Each quality can counter any of the others. This is part of what creates “balance” in food, but that’s for another article.

I won’t go into the rampant lack of testing in published recipes, but I will mention that I’ve cooked from some in the most precise of ways and still found them needing dramatically more or less salt—for my tastes anyway.

All this is why you should follow these rules:

1) If a recipe calls for salt and it’s baking and pastry (i.e.; culinary chemistry), then follow it to the letter and ignore all other advice I’ve just given you. Especially if its ingredients are presented in weight, rather than volumetric (cups, tablespoons, etc.) amounts. I know, I just told you to ignore salt amounts in recipes, but with baked goods there’s are reasons to stick to the recipe. One, salt inhibits yeast, so its presence in a yeast-containing recipe isn’t just for the flavour; it also keeps yeast from rising too quickly. Second, leaveners like baking powder and baking soda consist of salts (sodium bicarbonate) themselves, and the perceivable taste of salt could increase dramatically by a change in the recipe.

Seriously though if it’s not seasoned enough the first time, re-adjust the recipe for next time.

2) If a recipe calls for salt and it’s not pastry, season along the way.

3) If a recipe requires infusion of salt or other flavours (like rice or pasta) or long cooking times (like braised meats or a roast), then by all means add some salt to the beginning, and adjust as you go along. Never start immediately with the amount that the recipe recommends. It’s easy to add more salt, but impossible to take it away.

4) If you don’t trust your ability to season after the fact, and a recipe includes ingredients that are considered “unsafe” when eaten raw (eggs, ground beef, etc); then add some salt to the uncooked assembled recipe, take a small spoonful of it and cook it in a hot pan until safe, then taste it. It’s not a perfect method, but it’ll get you much closer and with experience you’ll be able to create better “starting guesses” on how much salt to add. I might point out that I once saw a chef instructor eat a pingpong ball sized lump of raw chicken sausage filling in order to test seasoning. Yeah, it was stupid, but he’s still alive and kicking. Last I heard, anyway.

5) Potatoes don’t draw out salt from food; that’s just a myth. That said, potatoes are high in potassium which has counteractive effects on salt in the body. Higher levels of potassium in the body will balance out sodium from salty food. 1

6) Learn to develop and trust your sense of taste. Gradually add more salt until the flavour level increases to where you want it to be.

7) If adding salt to something only makes it taste saltier, rather than more flavourful, you’ve either added too much salt or there’s too small a flavour base to start with. Always use each step in cooking to maximize flavour. That means don’t focus on the final flavour, but the flavour at each step. If you’re halfway through a recipe and it doesn’t taste like much, question why that is.

8) The smaller a recipe is, the easier it is to over or under season it. When you’re making 60L of soup in a commercial kitchen, it’s pretty easy to get the salt levels correct, because you have to add large amounts of salt to get a noticeable change. In a soup recipe that makes 1L, an extra half teaspoon of salt can make something go from “almost there” to “salty”.

9) Pepper isn’t a seasoning. It has a distinct flavour and heat; it adds something new to a dish rather than enhancing what’s already there as salt does. That’s not to say it doesn’t have a place in food, but not every dish requires it and others like Steak au Poivre or Cacio e Pepe use it as a main flavour. I remember watching a documentary or TV show about El Bulli, and Ferran Adrià was asked why there was salt, but no pepper on his tables. His response was “You don’t see cumin on the table either, do you?” Pepper is a spice, use it wisely.

In short, the use of salt is probably the most important skill you can have in a kitchen. It’s worth investing the time to develop it, rather than rely on the wisdom (or lack thereof) of others. Spend some time honing it and your food will benefit.