If you’re buying lean or low-fat hamburgers, hotdogs or sausages, I implore you not to.

I’m going to tell you something you’re not going to like hearing.

*you* are ruining hamburgers, hotdogs and sausages for everyone else.

“But I can’t be ruining it all by myself!”, you say. Well, for people who will directly eat those products you prepare, yes, you are. But also by making that consumer choice, you and anyone else who makes that choice tells food manufacturers, “we don’t want fat in our products”. This induces fat reduction in all products they make. And here’s why it’s wrong.

Okay, modern ambiguity about fat’s “badness” aside, hamburgers, hotdogs and sausages are made of ground meat. Almost always, the meat comes from highly flavourful cuts that aren’t very tender on their own; cuts that are high in connective tissue like chuck in beef and shoulder (butt) in pork.

In order to make those meats tender, they are ground and fat is added. Grinding the meat takes away the normal disadvantages of tougher cuts. So whether you grind lean or fatty meat, the end result is a somewhat even playing field in terms of the meat tissue itself. But that only does so much. Adding additional fat helps immensely in perceived tenderness and mouthfeel. It also adds a lot of flavour, as some of the really nice “meaty” notes come from fat soluble compounds. 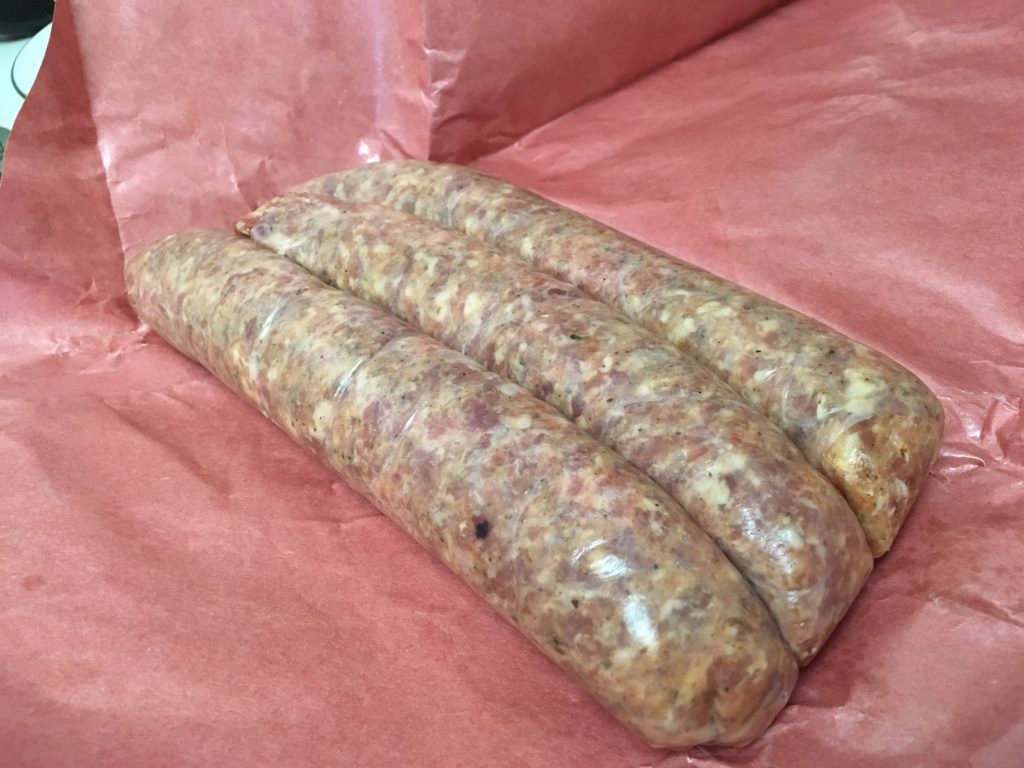 If you’ve ever had a really nice sausage or burger at a decent restaurant and wondered why what you’ve made at home has never been as good, know this: restaurants aren’t as afraid of fat. I’m willing to bet what they served you was between 20-35% fat. A lot of that will melt off, but the stuff that doesn’t gets sandwiched in between the little bits of meat, allowing them to move around more easily in the mouth and protecting against proteins coagulating the patty/sausage into one homogenous mass. For a home cook, there’s the added bonus of being able to get away with overcooking.

Yes, you can overcook your meat. A good, fatty burger or sausage can be cooked to the recommended “well done” and still come out feeling tender. If that lean burger or sausage gets overcooked however, it’s going to be dry and hard.

When as a consumer you ask for lean products, you’re ultimately also asking for more salt, sugar and added flavours. Leaner cuts of meat don’t often have as much flavour. Think of a beef tenderloin (filet) steak and a beef rib eye. Which is more flavourful? Tenderloin is wonderful and can be melt-in-your mouth tender. But it can also dry out quickly, and if it’s done to anything past medium is a complete stringy waste of money. And there’s also a reason restaurants serve tenderloin wrapped in bacon, or with a compound butter or other sauce: because it’s just not got that much flavour. Thrillest once took a poll of seventeen chefs, asking what meat is overrated. Nine of them mentioned beef tenderloin/filet mignon on the grounds of lack of flavour, due to lack of fat. So what do manufacturers do to make up for fat in ground meat products? They add *other* flavour enhancers, like salt, sugar, MSG and hydrolyzed soy or vegetable protein (“natural” sources of glutamate similar to MSG). I don’t have anything wrong with MSG myself, but I don’t like it being used simply to make up for something that’s lacking.

Now, I know people want less fat in their diets. And that’s commendable; less fat in the western diet is probably a good thing. However, Victoria Day (or Memorial Day) are one day a year. Eating a fatty meal once in a while isn’t so bad for you. It’s all about moderation. There’s this weird psychological phenomenon where we humans also tend to over-indulge if we know something’s been calorie- or fat-reduced. This pretty much negates the point of low-fat meats. Split a fatty sausage with your partner and fill up on the salad. Or eat one fatty burger instead of two lean ones. At least that way you also get less of the accoutrements (bun, condiments, cheese) in addition.

If you want to make your own burger patties, use medium ground beef. Though medium (the once-standard) is hard to find in stores these days, it’s likely there’s a butcher near you who can make you some if you ask nicely. But that’s only between 17-23% fat (here in Canada). If you want to go luxurious find a butcher who’ll grind you a 30% mix.

Likewise with sausages, buy them from a decent butcher, and ask the fat percentages (nicely, not accusatorially). For those who care for the craft of sausage-making, they’ll probably be happy you want something fattier, because it means you want a better product. This will make them reconsider just a little about appeasing the low-fat market.

Now, the reason I decided to rant on this is because I bought sausages yesterday. Italian-style pork sausages, made in-house by the local grocery store’s butcher (“Eric”; his name was even on the package). I took the meat out of one of them and cooked it like one would cook ground beef in a pan. The problem was, I needed to add oil to that pan. Which told me that sausage—which was not labeled “low-fat” in any way—was simply made with very little fat. It was nearly fat-free.

So, thank you for ruining my sausage, low-fat seekers.

Don’t do it again.