The long but intriguing story of how I got here.

Ignoring any philosophical discussions, I should write you a description of the person running this blog. Allow me to quote in the most cheesy of ways from Ratatouille: “I am a cook!”

I’m also a graphic designer. I’m a father to be; I’m a total nerd fanboy over science; I’m practical; I’m unashamedly realistic about some things and head-in-the-clouds about others.

But you’re not here for me, are you? No, you’re probably here because—like me—you love food. 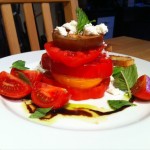 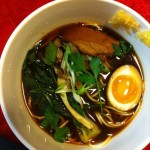 My past hasn’t always reflected that love. For over a decade, I worked as a self-taught graphic designer; mainly because it was the only way I felt I could parlay my artistic abilities without sketching commissioned drawings of dear departed family pets, or something else just as soul sucking. It allowed me to work on art behind a computer, where my “it’s-never-good-enough”-brain could hit command-z rather than go insane trying to erase to perfection.

Twelve years go by… Pretend you’re imagining me behind a computer, designing stuff. Some of it’s cool. Most of it is pretty boring.

As much as I love my mother, she was never a very imaginative cook. So, I grew up with no love of food, because there was no food to love. Trust me, “Creamed Salmon on Toast” should never be foisted on anyone’s palate; even if gathering state secrets requires the use of Jack Bauer-esque techniques.

And so it wasn’t until I started cooking for myself that I learned to love food for more than its role as fuel. Well, except for Beef Stroganoff. I’ve always loved Beef Stroganoff.

So where was I? Oh yes, twelve years went by. In the last half of those twelve, my passion for cooking had caused many to tell me I should follow that passion to culinary school. I balked at the idea, and pretended that I didn’t want to spend a decade in a low paying job to get even close to getting a coveted chef-de-cuisine position.

In reality, I didn’t want to do it because I was afraid. Fear of success has always been a problem of mine. But that’s a tale for another day.

My thirst for culinary knowledge finally got to the point where I could no longer contain it. I took the plunge and enrolled in a two-year culinary program George Brown College’s renown chef school. And boy did I kick ass there, graduating with honours and a letter of recognition from the Dean.

From there I spent a couple of years both working and staging (an internship of sorts) in some of the best restaurants in Toronto. Not an easy thing to do in your mid-thirties. If you’re over twenty, many chefs will think twice about hiring you on, as you are less likely to work for pennies or have the stamina for ten to fifteen hour work days. I’m guessing the fact that people tend to think I’m younger than I really am has kept me from being immediately shown the door on more than one occasion.

And then, during a rather busy late-summer brunch service, a tragedy happened; bacon grease got spilled on the floor!

A waste of anything bacon-related is always tragic. Imagine the smoky quiche crust that could’ve been made using a mixture of bacon grease and butter. Or the warm vinaigrette whose acidity could’ve been wonderfully balanced with that fatty salty flavour that very few things other than bacon can offer.

Well, I interrupted that bacon tragedy with my own. As I said, it was a very busy brunch. The restaurant’s regular dishwasher called in sick and the night guy was called to fill in. Brunch generally means there’s a lot of bacon. Sheet pans and sheet pans of it are cooked. Used greasy sheet pans ended up being placed in an area of the dishpit that they shouldn’t have. The dishwasher also didn’t seem used to the pace and intensity of brunch (there’s a reason most cooks hate having to work it) and this one was particularly hectic. He was so bogged down that he wasn’t able to get washed dishes out to stations fast enough. So cooks were having to enter the dishpit to get their own.

If you havent put two and two together, allow me to show you the math:

1 dishwasher out of his element
+ bacon grease dripping onto bare floor (rather than over non-slip mats)
+ cooks racing between the dishpit and their stations holding handfuls of dishes
= fall down go boom.

The falling itself wouldn’t have done much but bruise my ego. It was the two hands full of bowls that made all the difference.

Witnesses remember it being in slow motion. It happened so fast for me I don’t really remember hitting the floor. I do know I fell with a lean to my left. When I hit the ground, the bowls shattered. At least one of which decided it liked the taste of blood and entered into my thumb, lacerating nerve and tendon.

So I was all of the sudden on the ground in a quickly growing pool of blood. My thumb now looked like a shark. Not like a shark attacked it, but an actual shark. When you tell people you’re a cook and you cut your thumb, the first thing they think is that it was with a knife. Haha! You fools!

Fellow cooks might be impressed to know I somehow managed to keep the blood off my whites, with the exception of a few drops near the ankle of my checks. That’s professionalism, folks!

The amount of blood on the floor made a veteran server in his mid-30s actually scream like a girl.

I was rushed to the hospital lucid and talkative but in a state of shock. After many hours of waiting, I was temporarily stitched up. Four days later I was having surgery to repair the nerve and tendon. It went well and I my hand was put in an immobilizing cast.

Three days after that however, I was in extreme pain. Peering as much as I could into the cast, I discovered my thumb swollen and stitches split. The next morning, I was admitted to the hospital with a staph infection.

I (like 10% of the population) am quite seriously allergic to penicillin. So I was blasted with extremely potent intravenous vancomycin, which is particularly unkind to your kidneys. Yay! Good thing I didn’t have any E.Coli infections when I was a kid, otherwise I might have to spend the rest of my life worrying about future kidney problems! Oh, wait…

Anyhow, for five days I was in a hospital bed with a MRSA infection. Well, they (the Infection Diseases department of the hospital) told me it was MRSA, but seem to deny that now, saying only it was a “gram positive coccus infection”. Conspiracy, perhaps?

For weeks, my thumb looked like a zombie toe. Physiotherapy was painful and regular. After nearly 7 months, I had only marginal use of my left thumb. This was attributable to large amounts of scar tissue holding down the tendon. Additional surgery was performed, but despite starting the physiotherapy the day after the surgery, scar tissue again won the battle.

Suffice it to say, my left hand is not exactly in tip top shape. Picking things up with it seems to be only marginally more effective than a claw machine at Chuck-E-Cheese. And I’ve been told it’s quite likely it’s a permanent thing. It doesn’t stop me from cooking at home, but it’s enough of an impediment to make working in a fast paced kitchen both difficult and potentially dangerous.

So, here I am. My love of cooking is still growing, but a big outlet is gone. I started this blog in hopes of building something bigger out of it. Hopefully, readers will get out as much as I hope to put in.