Busy day and I’m just under the wire with this one, but here goes…

Pans come in a variety of shapes and sizes. But it’s crucial to know which pan to use for what job. Knowing so can speed up your cooking, or make sure you get the most flavour out of your food. Using the wrong pan can lead to burning or slow cooking times.

Clad or layered stainless steel (stainless with an aluminum or copper slug on the bottom, or sandwiched within the steel) is by far the most common material for pots and pans these days. It’s lighter and heats up faster than cast iron, but is heavier and heats up slower than full aluminum or copper. Being in the middle of the pots and pans thermal conductivity scale means it’s like the All Purpose Flour of cookware; it’s satisfactory for most things, but isn’t ideal for everything.

Best usage for stainless steel: No real “best”, but it does an okay job otherwise.

For searing meats, cast iron does a much better job. Being a poor thermal conductor means that cast iron carries a lot of heat “inertia”. Once it’s heated, it has a tendency to stay heated. So putting a cold or room temperature piece of food on its surface means it’s not going to lose much of it’s surface temperature. Cast iron is great for anything you want to build a nice even crust on, which is why it’s one of the preferred methods for searing a steak on the stovetop. It does have the disadvantage of having zones of different temperatures while it’s heating up. Always make sure it’s been preheated for a great deal of time before use.

On the flip side, copper and aluminum pots heat up evenly and quickly, so they’re great for liquids. Their high thermal conductivity means there’s little keeping the heat from your burner reaching your food. Both however, should not be used for acidic or alkaline foods, they can make food taste metallic or even create poisonous compounds. Cast iron is also reactive, but of its cookware is seasoned or ceramic coated, make it a moot point.

Aluminum frying pans are a bad idea. While light and easy to manipulate, they often do a piss poor job when it comes to frying. Stainless is better. Aluminum is common in commercial stock pots. The thermal conductivity allows heat to move faster into your food.

Copper is a little heavier and a better thermal conductor. So it’s better for things like candy making, and is most commonly preferred due to its ability to apply quick, even heat to sugar. The negative is it’s damn expensive. 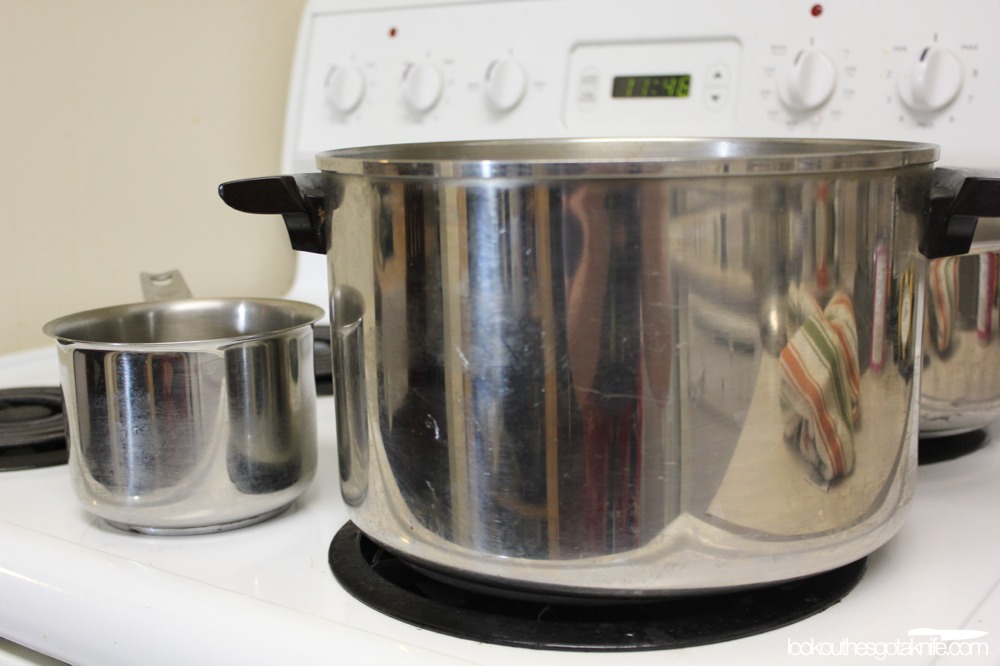 Choosing the size of your cookware makes a world of difference. Frying a single chicken breast in a 30cm (12 in) pan creates some problems. Because there’s so much surface area not being used, that area just ends up heating air (and dry air is a poor thermal conductor). Large pans are meant to be used for large or multiple items. An 20cm (8 in) fry pan will do a much more efficient job.

A surface area much larger than your food also means there’s more room for cooking oil to spread out, meaning less of it comes in contact with your food. It also means high-viscosity liquids have more area to stick to. If you’re melting 2 tablespoons of butter in a 30cm (12 in) pan vs a 10cm (4 in) pot, you’ll actually end up with less butter when you pour it out, unless you scrape it clean with a spatula.

Use surface area to your advantage.

There’s a reason stock and pasta pots are tall and narrow; there’s less surface area for liquid to evaporate from.

In stock pots, it means more liquid—and volatile flavour compounds—remain in your soup stock as the hours of leaching flavour out of bones and meat roll by.

In the case of pasta, you want to lose as little water as possible. As starches move from the pasta into the water, they make the water “sticky” as it evaporates. The more water you cook in and is left at the end of it all, the less your pasta is likely to stick together. That’s why you should always use the largest pot you have filled as high as possible when you make pasta, regardless of how much pasta you’re actually making.

On the opposite end, a high surface area is great for reducing liquids. Using a large, wide frying pan or skillet for any reduced sauces is one of the best choices you can make. You’ll be able to reduce your liquid much faster. And honestly, reducing a stock to a demi-glace in a marmite (the french term for a stock pot) is a mighty pain in the ass.

Repeat after me: Not every pan has to be non-stick.

That’s right. You really only need one or two non-stick fry pans. And they don’t need to be used for everything either. They do best in situations where you’re cooking a high-protein, low fat food like fish, chicken breast or eggs (I’m talking about the whites here). Sugars will still stick to non-stick.

What many pot companies won’t tell you is that non-stick coatings are really, really bad thermal conductors. When you cook on non-stick, it’s like trying to cook on silicone. In effect, it actually slows down cooking, and makes it harder to reach higher temperatures required for proper browning of food. So really, it should only be used in situations where the risk of sticking far outweighs the risk of the food not browning.

I won’t go into all the tricks cookware companies like to make consumers believe, but non-stick stock pots, dutch ovens or sauce pans are a waste of money. Any place where you want consistent heat or are cooking liquids, non-stick is pointless.

Another idea that many might have trouble believing; using the same amount of oil in non-stick and regular pans of the same size, your food will pick up more oil from the non-stick pan.

Because all non-stick repels liquids. Bare metal or ceramic coated pans will hold on to some viscous liquids like cooking oils. This can be tested via a side-by-side test where a drop of oil is placed in both styles of pans, then a paper towel is dropped over top. More of the oil will end up in the towel from the non-stick cookware. If it’s going into the paper towel, it’s going into your food.