I love Food Republic, but they must be hard up for stories this week, because they put up a story called “Five Crucial Kitchen Techniques and How To Use Them“.

Going through the list, I disagree that—with the exception of shucking oysters— anything they listed can be called a technique.

Five essential techniques I’d say are more important, and seem difficult for many to master?

I’m going to spend the next five days going over five techniques that I feel are far more important to master. 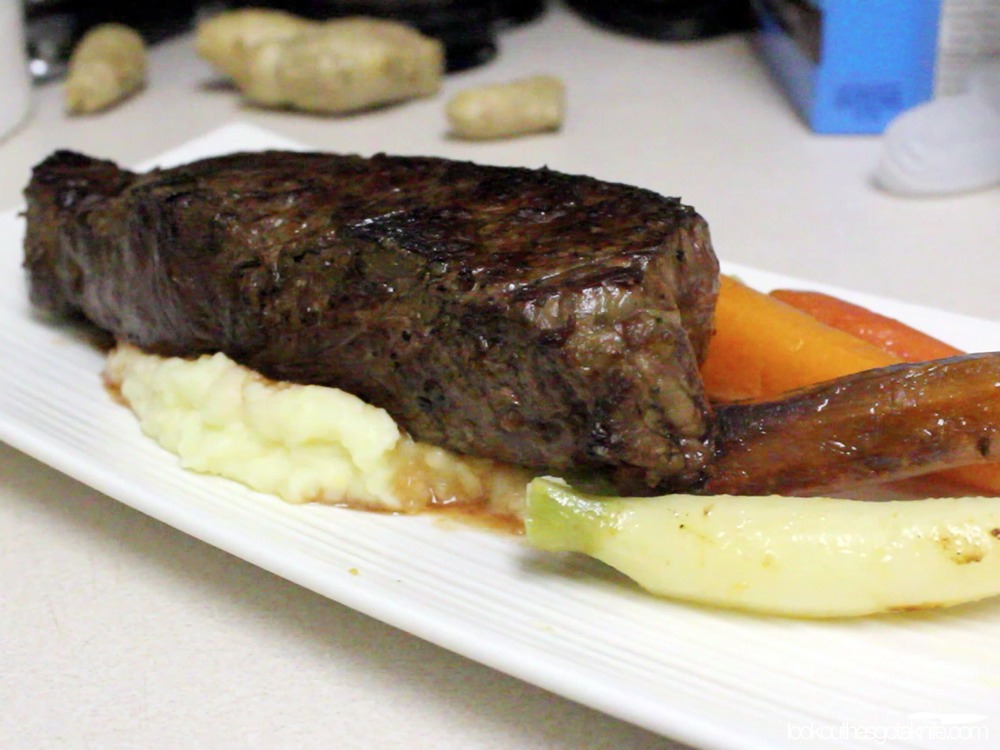 Oh sure, everyone knows how to brown meat, right? Actually, in my experience, they don’t. Many seem to confuse “grey” with “brown”, most especially with ground meats.

All animals have a protein called myoglobin in their meat. Myoglobin is the meat analogue to the blood’s haemoglobin, which helps store oxygen in cells. It also gives meat a red colour to varying degrees, based on the animal and the type of muscle that the meat came from. Well used muscles, like leg muscles on a chicken or steer will contain more myoglobin than lesser used muscles like chicken breast or loin. But chickens in general contain less myoglobin than beef, which is why their meat is pink as opposed to red.

This is also what gives meat juices in rare to medium meats a red colour. It’s not blood. I repeat, it’s NOT BLOOD. Sorry, vampires.

Unfortunately, this is no where near high enough temperature for browning (maillard and caramelization) reactions to occur. Generally 148°C (300°F) is required for typical maillard reaction browning to even start in meat.

Hence, that “greying” can occur even if you’re boiling meat in a pot of water. When a recipe calls for meat to be browned, it generally involves high heat, a pan quite a bit larger than your meat, and patience.

The large pan/small meat ratio should be at least 2:1. Meaning the surface area of the pan should be at minimum twice the size of the surface area of the meat that will be touching it. High heats will cause moisture to bleed out of your meat. Too much meat in a pan means there’s nowhere for any liquid lost to go and it remains trapped with your food. Essentially, you end up boiling your meat, as the trapped liquid will keep your maximum temperature in your pan around the 100°C (212°F) mark.

The higher heat helps keep internal moisture and promote browning before drying out the inside of the meat, as well as quickly evaporating off any liquid that may leak out.

If you’re cooking ground meats, you may need to use a larger pan-to-meat ratio of 3:1, as there’s significant cell damage and surface area to cause a great amount of liquid loss. Brown in batches, and recombine all cooked batches together near the end. Trust me, next time you make those ground beef tacos, your taste buds will thank you.

Busting A Myth: Bring meat to room temperature before cooking.

The common wisdom has been to bring meat up to room temperature before cooking it. The argument is that this initial warmup creates more even cooking. And this is great, for any meats that are generally cooked to a baseline temperature of well done. That list includes poultry, and…?

Don’t think I forgot about pork. Nope, because Trichinosis rates have been reduced to almost nothing worldwide. You have twenty times higher odds of getting struck by lightning than contracting the parasite that we’re trying to eradicate by overcooking our pork. Note to self: investigate lightning-fried pork.

To be honest, the “room temperature rule” hinders the final quality of a great number of meats because so many are cooked best without even temperature throughout. With a great steak, you want a dark outer crust and (generally, the preferred) medium rare interior. Some meats, like venison, duck breast or bison, suffer from toughness and dryness if cooked even a small amount above medium rare.

We know that flavour is developed through the browning process; as sugars and proteins reach certain temperatures, their chemical makeup changes. Different sugars break down at temperatures ranging from 110°C to 180°C (230°F to 355°F) and change into other sugars, invert, turn brown and release volatile compounds (ie; aromas and flavours). This is caramelization.

Proteins react in a different way. Above 150°C (300°F) they break down into their base amino acids, combine with sugars and turn brown. This too creates hundreds of flavour compounds. This is the Maillard Reaction

While caramelization is less likely to occur in meats, the Maillard Reaction is a greatly desired result. Getting this to occur without over cooking the interior meat is the goal.

When not to bring your meat to room temperature:

When it doesn’t matter to bring your meat to room temperature or not:

When you should bring your meat to room temperature:

Restaurants are able to achieve quick, well-crusted, rare (or even blue) steaks by using incredibly high heats. Salamanders (commercial broilers) are regularly used, and they can achieve upwards of 815°C (1500°F), other methods include indoor gas charbroilers(400°C/750°F) and high BTU convection ovens capable of 260°C (500°F). I’ve even cooked steaks on a commercial flat-top capable of heats that can make its iron surface glow. These temperatures can be incredibly difficult to achieve at home with anything but outdoor grills, which are notorious for uneven cooking this high.

Few restaurants have the advance notice or space to bring meats to room temperature before cooking. Most just pull a steak straight from the fridge, season it and toss it on the heat.

A high enough heat more than guarantees lots of Maillard Reaction. But the truth is you only need to be able to get the surface of meat to a sustainable 150°C (300°F) to get it. Lower home oven and stovetop temperatures mean longer, more even cooking, so you still want some temperature insurance. This is most important for thinner-cut steaks. That’s where starting straight from the fridge comes in.

Home directions for A Great Steak

1) Pull your steak from the fridge, pat the surface dry, season well with salt only (pepper will burn).

2) Add a small amount of oil to the pan.

3) Sear immediately in the hot pan from cold. Turn the meat every 10 seconds. Aim for lots of brown and little grey on the surface of the meat. Constant turning will keep the interior from overcooking.

4) Once sufficient browning has occurred, transfer immediately to the baking pan and place in a 190°C(375°F) oven. Cook until it the temperature reaches about 3°C-4°C (7°F-8°F) below desired internal doneness. Psst, medium rare is around 60°C (140°F).

5) Allow the steak to rest for 5- up to 10 minutes. The temperature will continue to rise, and it will peak right around your desired temperature.