I really want to write that the best cooking technique one can learn is continually educating yourself about food, but despite its truth, it sounds like a copout. So I can’t do that. But I really, really wanna. Like, so badly.

Fine. I suppose I’ll indulge myself in a less philosophical answer.

One of the things people seem to want to really really believe is that any recipe can be sped up. Our western lifestyle of convenience has made cooking a chore, and something on which as little time as possible should be spent. To me, this is sad beyond words. But I digress.

Unfortunately, that idea is antithetical to the idea of low-temperature cooking. In it’s simplest explanation, it means cooking in the range of 60°c (though sometimes lower) to 100°c.

Modern low-temp cooking generally refers to water bath cooking (erroneously referred to as sous-vide, which merely refers to food being under vacuum). This is where scientific equipment is usually required. Immersion circulators are 1/2 water pump, 1/2 highly accurate heating element. They keep liquids at a very precise temperature. Food, bagged in watertight plastic, gets placed in the bath and “cooked” with the ambient water temperature. This allows for very slow cooking at temperatures just high enough to pasteurize the food.

The bad part is that immersion circulators are prohibitively expensive to the home cook, costing thousands of dollars and being rather complex in use. Or are they? 1

Older “slow cooking” methods are things like traditional barbecue smoking, rotisserie over open coals/flame, and cooking underground over hot coals. They all produce juicy, tender results, though generally can’t get as low a temperature as more controlled methods. 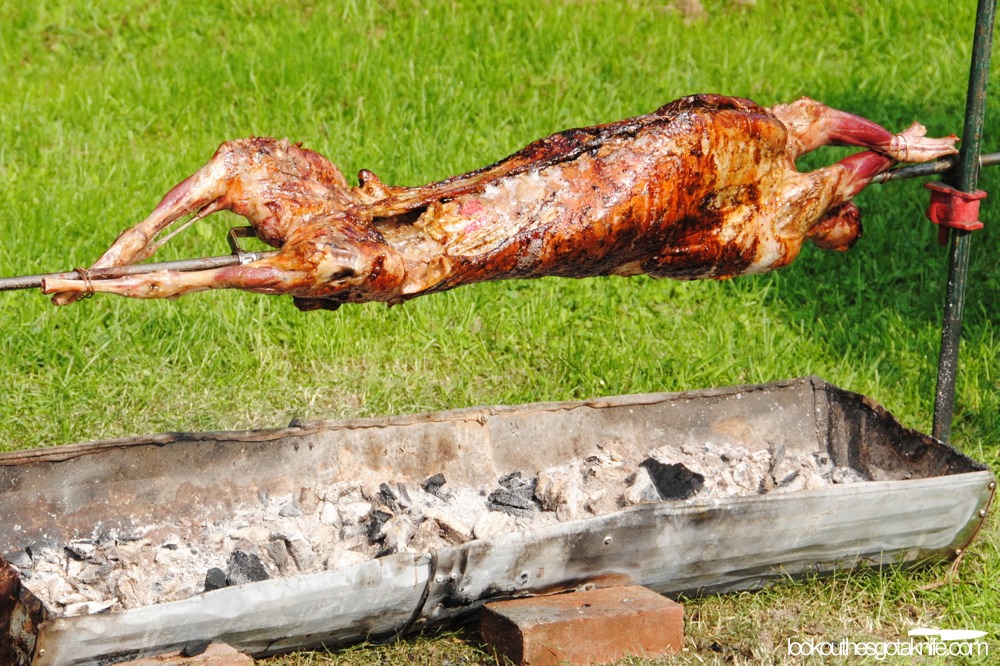 More available to the home cook however, is just using lower temperature capabilities of their existing equipment. In my experience, people tend to use only one temperature or method to cook with, but quite honestly two or more temperatures or methods can improve the quality of your food.

A Prime Rib Roast is a great example of a food that can greatly benefit from low-temperature cooking. Typically, it’s cooked at a high temperature—usually around 230°C-250°C (~450°F-475°F) for a few minutes—then dropped to a moderate one of say 160°C (~325°F) for the remainder.

The fact of the matter is though, that any temperature above about 60°C (140°F) will both cook your food and kill microbes. It’ll just do so at much slower rate. It will also maintain better texture and flavour in your food.

Rapid changes in temperature cause cells to literally pop like a balloon as their component water heats up and expands or vaporizes (turns to steam). This is most of what causes a big puddle of juices for instance, when you cook a steak. Low temperature cooking can help prevent this, as it will allow some liquid to escape the cells through slower evaporation or expansion, causing less major structural damage to the cells themselves. This means less drying out, and juicier, softer texture.

In addition, proteins with high amounts of connective tissue greatly benefit, as collagen begins to melt at relatively low temperatures, but can sometimes take substantial amount of time. Think of that collagen as a meltable mortar between cell “bricks”. When it’s solid, it gives firmness and structure to meat. As the collagen melts, it acts like a lubricant between the cells, freeing them from one another, and making meat feel more tender, regardless of doneness. This is the same reason why braised meats, which are technically way overcooked, can be some of the most tender pieces of meat.

So how does this all become a technique?

Knowing that lower temperatures cause less damage and produce better results, it can be used to your advantage. Searing meats and proteins at a very high heat, and then moving to a low oven makes for a much better product, regardless of the meat being cooked.

So in the case of that roast, you’re better off searing the whole surface well in a very hot, heavy bottomed pan to start a nice crust, then placing it in a very low 75°C (~166°F) oven for several hours until it is cooked to the desired temperature. For a medium-rare roast, you will end up with less greying of the meat and more overall pink.

On a related side note: Use a probe thermometer with a temperature alarm, and never assume that minutes-per-pound rules actually work. Water content, fat content, ambient humidity and many other factors can affect the cooking time of your food dramatically. If you’re worried about timing your whole meal together, you’re better with par-cooking any side dishes, then finishing them off or reheating them when your meat comes out of the oven to rest for a few minutes.

In addition, because of the proximity to the ribs, Prime Rib contains a large amount of connective tissue, so a low and slow temperature can melt that collagen without overcooking the meat. The great part about for the home cook is that it’s much harder to overcook meat using lower temperatures. There’s a much greater length of time between “cooked to perfection” and “cooked to drywall”.

Even if it does take more time, it’s well worth the results. And because you’re using a low temperature (far lower than those required to set most things on fire), you can breathe easy and while I don’t recommend this (but won’t confirm nor deny whether I’ve done it myself), you could even leave your home while it’s cooking. Many have no problems leaving their home when they’re cooking with a crockpot, and 75°C (~166°F) is a lower temperature than the low setting on most slow cookers.

Or really, if you’re that worried you can use a slow cooker rather than an oven. The “warming” temperature of a slow cooker is generally around 71°C-74°C (159-165°F). Sear that roast off in a hot pan, then place it the slow cooker, raised up from the direct heat of the bottom using a rack, vegetables or other means, all using the “warming” setting. Just make sure you’ve preheated the cooker before hand, as bacterial growth could be promoted if you’ve started it from cold. I’d also accurately measure the temperatures of your cooker before trying this, as many new ones are known for exceeding the common temperatures associated with slow cookers.