[NOTE: Having a baby has taken away a lot of the time I was previously able to dedicate to this site. I have over a dozen half-written posts, a hundred recipe photos and many, many ideas for other posts. My distinct, super-heroic ability to ramble on and turn what should be 200 word posts into 3,000 word dissertations means that I end up focusing a lot of time on the actual writing. This likely will not change, so I just need to find more of that elusive, unicorn-esque thing they call time. Don’t give up yet though——I do intend to post more often as life allows.]

In the world of television, soufflés would seem to be the most difficult and fussy food ever created; they appear to require master skills and they will deflate if you so much as look at them funny. Fortunately, sitcoms aren’t exactly the paragon of truthiness and TV shows very rarely gets the life of a cook right (except maybe these ones).

Soufflés are rich, yet light and airy. Eggs, flavour ingredients and technique are the basics. And if you make them, despite the fears the odds are they’ll turn out just fine.

Speaking of fears, the common ones are that soufflés deflate easily, and that “fat deflates a foam”.

Both are loads of crap. Yes, crap.

Firstly: A properly made soufflé (which is not hard), seldom just deflates with anything but time; and time stops no soufflé from deflating. The whole reason they inflate is because the protein structure of the egg white allows it to hold onto bubbles easily. Heat “sets” the bubbles in place, and then they expand when they’re heated up, quite like a balloon. Expanding hot air stretches the bubbles and give soufflés the impressive lift that they’re known for. But as that hot air in those bubbles cools down, they shrink back down to their original size. This is the whole reason soufflés must be served straight out of the oven for best results. If a soufflé is deflated by the time it hits the table, odds are it took too long to get there. Here’s a little (though very limited) trick: Soufflés will expand again when reheated. That said, they’ll never expand as much as the first time, and too much reheating can turn the structure tough and eggy, so be careful.

Secondly: Fat does not deflate all foams. Consider this; if fat deflates a foam, soufflés wouldn’t work at all. Once egg whites touched egg yolk (and other fatty ingredients), it would start to deflate. Whipped cream, which contains a large amount of fat, also foams quite nicely. Both egg yolks and milk/cream have natural emulsifiers in them. This keeps the fat from interfering much with the water-based portions. Without emulsifiers, fats would of course, modify the surface tension of the liquid you’re whipping and interfere with the creation of bubbles (which is why it’s added to things like apple juice to keep it from foaming). But we don’t have to worry about that. If you get a little yolk into your whites, it’s not the end of the world. Once whipped in, all will be fine. Just don’t over whip your whites, yolk or not. Because that is evil, and makes for a lousy product.

4 8-9oz ramekins (taller styles will give better lift).
a sheet pan.
a whisk.
a hand-mixer or stand mixer with whisk attachments (or one hell of a beefy arm holding a whisk).
a medium, heavy bottom sauce pot.
a stainless steel, glass or copper mixing bowl, capable of holding at least 3L or more.
a fine grater for grating fine cheeses (a microplane is best).
a cutting board and knife, for chopping chives finely.

Re: White pepper; its use in this recipe is purely aesthetic. It’s just so there aren’t little black specks throughout your soufflé. If you don’t have it, use a slightly smaller amount of black pepper as it’s slightly hotter.

Re: Sherry. Use cheap stuff for this. Honestly, the XO Pedro Ximénez stuff is too good for anything but drinking on its own, and its subtleties would be lost through the cooking process. If you don’t have sherry, you can always just use some dry white wine instead.

1. Preheat an oven to 220°C/425°F. In a medium sauce pot over medium heat, add the medium butter in a medium fashion. When fully melted, stir in flour to make a roux. Allow to cook for a few minutes, stirring regularly. Avoid putting colour on it.

2. Add the cold milk and sherry, whisking until roux is fully incorporated. Raise the heat and bring just to simmer, stirring and scraping the sides regularly, until thick and smooth. This should take just a few minutes. The béchamel should be silky and not floury. If it is, keep cooking it dammit.

3. Remove from heat and allow to cool slightly. While this is happening, you can separate your eggs from their yolks if you haven’t already. Except that the recipe already called for them separately, and we do read recipes, don’t we? That means you should’ve done it by now, you slacker. Add the grated cheeses to the béchamel, stir lightly and allow it to sit and melt.

4. After that small wait, stir the cheese in completely until incorporated. Adding the cheese should have cooled down the sauce to lukewarm. If it is still hot and steaming, let it sit a bit longer. When cooled, whisk in your egg yolks, chives, salt, white pepper and cayenne pepper.

NOTE: At this point, you can set the yolk/bechamel mixture and egg whites into the fridge in separate containers for no more than two days. Allow them to come back to room temperature before continuing.

6. With a hand-mixer or stand mixer (or if you’re a masochist, with your arm and a whisk), beat the egg whites until stiff and fluffy (stiff peaks stage). Fold the whites into the yolk mixture in thirds, making sure it’s all incorporated before adding the next third.

7. Pour the egg batter into the greased and cheesed ramekins, right to the top. This is a thinner soufflé batter, so top-hat tricks won’t easily work on it. Don’t worry anyway, this recipe is a grower, not a shower. Place filled ramekins on a sheet pan and into the oven. Immediately turn the temperature down to 190°C/375°F and bake for 22-25 minutes, until well risen and still slightly wobbly.

8. Serve immediately. Like, don’t even think about it. Launch it molten hot into your mouth. Chase it with a dainty salad, like the one in the pictures. 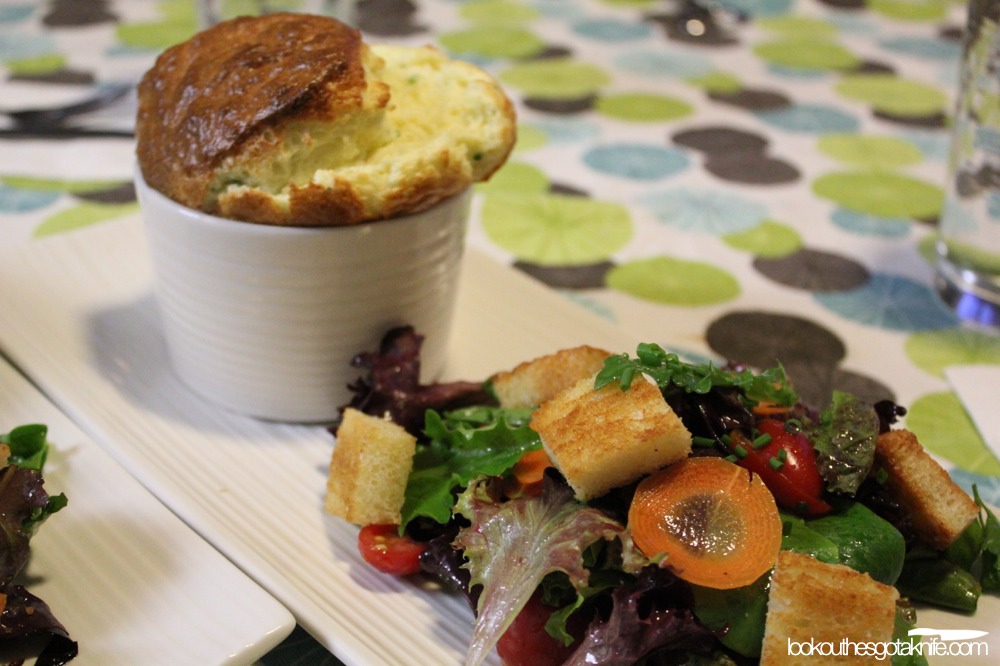