1. Whisk a cold pat of butter into a sauce.

No, I’m not Paula Deen and I don’t put a pat of butter on everything. In fact, I rarely use it on its own for anything but bread (which I don’t eat often) or pastry items. However, butter makes sauces better. 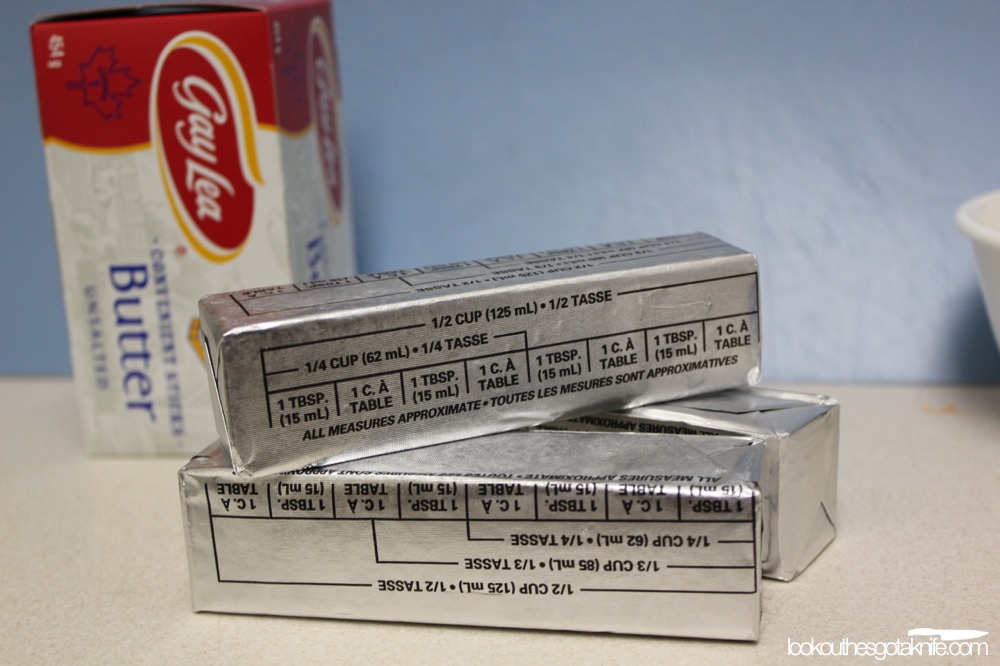 Say you’re making a duck breast with a reduced wine/stock/dried cherry sauce (A recipe I plan on putting on the site someday). You create this luscious, flavourful sauce that is both sweet and tart, but has a slightly thin mouthfeel. It’d be great as is, but while the sauce is hot, drop about two teaspoons of cold, unsalted butter into it. Swirl the pan and watch as magic takes place. That sauce will look a little messy as the butter melts, but the natural lecithin in the butter and the swirling motion will start to emulsify it. The sauce will begin to take on a nice glossy sheen, and thicken ever so slightly. It will behave better on a plate and spread less easily. Most of all, it will take on a silky, richer texture and flavour that wasn’t there to begin with. And that’s what it’s all about, right? Flavour?

2. Pre-cook the flour in a roux for consistency and accuracy.

A roux is two parts; a starch thickening agent and a fat buffering agent (usually butter, but oils and animal fats are sometimes used). The thickening power comes from the flour. When flour hits water, the starches begin to uncoil and swell, turning into a gel. The concentration of this gel in the parent liquid primarily determines the thickness of the final liquid.

The butter on the other hand helps the flour spread out before gelatinizing, and offers some minor heat protection, as well as flavour.

This is where I note that if you’re using a hot liquid, your roux should be cold or room temperature. If your liquid is cold, use a hot roux. The temperature difference allows the fat to spread out first. Otherwise — as one of my culinary instructors often liked to say — adding a hot roux to a hot liquid makes for great dumplings.

Unless you’re making what’s called a white roux, the roux is almost always cooked for a period of time before using. This allows it to take on a bit of colour; from a blonde roux for a velouté, all the way to a black or “brick” roux for gumbo. A longer cooking time means it’ll have more of a toasted flavour, but less thickening power.

Knowing however that main reason for the fat being there is to spread out the starch molecules before they swell, one must ask why the fat needs to be there in the cooking process? Cooking butter for the length of time needed for dark roux means that the milk solids burn. Any flavour that butter would’ve added there is now bitter and burnt one. This is why dark roux is generally made with oil or clarified, rather than whole butter. The whole point of using butter in light roux is flavour, so why do dark roux have to miss out?

The solution? Cook your flour first.

In a hot oven or in a thin layer in a large skillet or fry pan, toast the flour to a desired colour, stirring or shaking the pan regularly. This toasted flour can be quickly whisked into freshly melted butter. It will have the same flavour and texture, but there’s less likelihood of burning or unevenness, and it also means that whole butter can be used for black roux. The best part; toasted flour can be made in larger batches and kept in an airtight container in the freezer for months. There’s also no waste of butter or oil if burning should happen.

I should also note that roux made regularly freezes well in plastic-wrap-lined ice cube trays for separate portioning.

There’s also beurre-manie, the sister to the roux. It too is butter and flour, but the flour is mixed with room temperature butter, creating a paste that can be whisked into sauces. Because it’s un-cooked prior to entering a liquid, beurre-manie has a limited usage and your final liquid must be cooked for a long time to remove that cereal, dry mouthfeel and taste. Sauces with beurre-manie will also never have the same toasty flavour that a cooked roux will have.

That is, unless you pre-toast the flour first.

Many know that to keep broccoli, asparagus, green beans, etc. green, that you should blanch them in hot, boiling water for a few seconds, prior to cooking them via another method. There is however, a better reason to blanch.

Think of (most) fruits and vegetables as trojan horses for seeds. A flower becomes pollenated and makes a fruit. The fruit or vegetable then acts as a vehicle for a seed to leave the plant. They’re then disseminated across the land. Sometimes by mere wind or gravity, many times by other animals. They taste good to us so that we spread their seeds. We are constantly manipulated by nature, but that’s another story.

Anyhow, back on topic here; In order to expose the seed, the “meat” of the fruit or vegetable usually needs to go away. It can’t always rely on animals’ digestive tracts for this process, so there’s an enzymatic action backup. This is what happens when fruit rots (along with some bacterial action). Cell walls are dissolved, colour changes and the fruit or vegetable turns soft, allowing bacteria, mold and other nasties to take over. This initial enzymatic action also happens to be sped up in warm temperatures.

When these foods are cooked in a way that doesn’t have a constant, surrounding, ultra-hot temperature, that enzyme will begin to act on surface areas that are merely warm, and you end up with greyish beans instead of green beans.

Somewhere along the way, us humans realized that the enzymatic action that caused massive colour change could be shut off with a dunk in boiling hot water. Being completely enveloped in instant heat means the surface enzymes will be deactivated. It’s a full-out assault from all sides. Once those enzymes have been stymied, a dunk in cold, cold water stops any further cooking.

Once the fruit or vegetable is cooled down, it can be reheated and cooked again losing far less of it’s colour and texture than it would have had it been cooked without blanching. This is why blanching is so commonly used in restaurants and why it’s a recommended step in the cooking of most vegetables. It’s also why you should use it whenever possible.